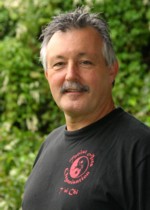 Tony Swanson started training in martial arts in 1962 with Judo, attaining a brown belt, and Wado Ryu Karate with Tatsuo Suzuki, reaching 2nd Dan. He started training with Professor Chee Soo in 1968 and trained continually until Chee Soo’s death in 1994. He studied all the martial systems taught by Chee Soo as well as the health and massage arts. On Chee Soo’s death, Tony set up the Taoist Arts Organisation to carry on the teachings within the Lee system in their orginal form. Tony is currently writing instruction and teaching manuals covering all aspects of the Lee system

Since its inauguration, the Taoist Arts Organisation has become an ITEC registered college, has two NVQ Assessment Centres not only covering NVQ Sports & Recreation Level 2 in Chinese Martial Arts, but also Training and Development and various other qualifications. Tony is an OCR qualified Assessor, Internal Verifier and is currently going through External Verifier training he has NVQ Level 2 in Sports & Recreation in the context of Chinese Martial Arts.